While ceramic 3Dprinters are becoming more common the cost of 3D printed consumer stoneware is still high. Dutch Design duo, Marlieke & Yao from Vormvrij|3D, has spent the last year developing an easy to use stand alone 3D printer capable of printing ceramics op to 85 cm tall with a base spanning 60 by 80 cm. They produce a steady stream of pottery while improving their printer design. 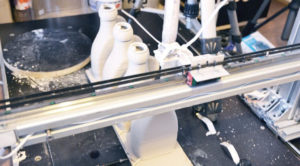 ‘Printing with clay is not a sterile clean business, it’s more like a normal potter’s workshop’.

The mix of ceramics and 3D printing followed their combined interests and resulted in a print and clay extruding system which is slightly different from the general makeup of contemporary clay 3D printers. Using a fine balance between print speed and air pressure they can regulate the material deposition from their 8 liter pressure vessel holding about 15 kilos of clay mixture. A recent addition of their prototype clay-air separator leaves the final print 98% bubble free and makes it easy to print with simple hand mixed clay. Having more than two years of experience with plastic extruding desktop 3D printing Yao found the process of design and the long wait for the product to materialize frustrating. While looking for faster ways to complete the 3D printing process Marlieke was trying to find the right potter’s wheel to create her ceramics with. The fusion of the two lead to the creation of a sturdy large scale 3D printer capable of printing fast and reliably with normal potters clay. 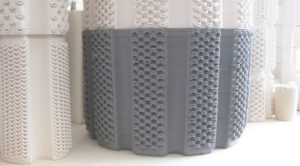 ‘Woven and knitted patterns are a typical feature of this production process.’

While the design and creation of their large single arm printer took
only a couple of weeks the process of finding the right clay mixture
to print was more difficult than expected.

One of the obstacles to overcome was the clay collapsing on it’s own
weight when printing large items. Using dryer clay was an easy
solution but it resulted in rough and very outspoken surface
textures. The strain on the machine and the danger of an exploding
pressure vessel, ‘the mister bean effect’, also became a real worry.
After months of experimenting they found the right types of clay and
mixtures to safely print whatever they wanted. Rough or smooth and
sometimes using external heat to speed up the internal integrity of
the larger prints they can now print functional ceramics in
stoneware, chamotte, terracotta and other regular clays. “For now
it’s the size of the oven that limits our output. But that will change as
soon as we find a larger oven that can run on regular 230 Volts.” Yao
says. 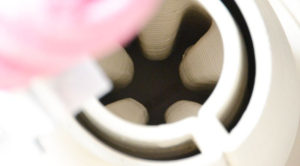 ‘Inner structures are one of the less explored features of clay printing.’

“The technology of 3D printing and clay allows us to quickly test and
try new designs. Instead of days it now only takes one hour to design
and make a series of simple vessels, bottles, cups or vases. If it’s not
as we expected we can fully recycle the material and start over. And
that is only one of the many benefits of printing with clay.” according
to Marlieke. 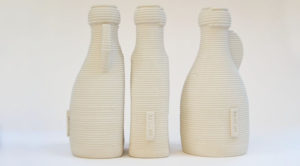 ‘Design and production of these 3 bottles took less than 1 hour.’

3D printing obviously leaves its signature on the designs of the duo.
Layered depositional manufacture is a trademark of 3D printing and
printing large scale only emphasizes that fact. They regard it as part
of their creative process and find the layered texture a welcome
addition to the grain of the material.

Clay is a natural product and mixing it by hand produces slight
variation in consistency. It gives tiny random fluctuations to the
speed at which the clay mixture is layered. Those variations lead to
products that are all unique. “Even the drying conditions will ad to
the final shape of a print” Marlieke says. And although they have a
small cabinet with a few ‘perfect prints’ they enjoy the fact that
every clay particle may lead to an unexpected result. 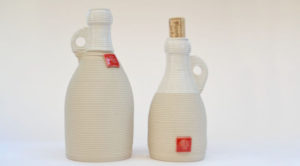 ‘Creating smaller or larger items is as easy as digitally scaling the design.’ 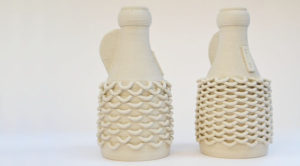 ‘The open knitting pattern; impossible by hand but no problem for 3D printers.’

At the moment printing in clay is a continuous print movement
which results in a spiraling layered texture. The capability to easily
emulate woven or knitted patterns is a bonus to the otherwise
difficult to realize textures on the sterile and smooth makeup usually
seen in industrial ceramic production processes.
“This fusion of craft, human touch and 3D technology allows us to
quickly and accurately produce and reproduce ceramics that would
otherwise take a Tibetan monk days on one single item” Yao says. 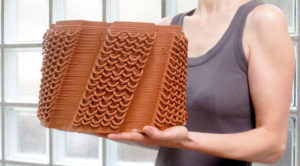 “But the last steps still require an artists hand” Marlieke continues,
“firing, glazing and re-firing need time and dedication. In the end
every item is inspected and touched by hand. An intensive process
not to be forgotten. But the fact that most prints become functional
ceramics make it very fulfilling.” ‘The variety is endless.’

Although clay printing will probably not go mainstream like plastic
3D printing, Yao is now contemplating a smaller version of his clay
printer. “It would still be a heavy machine. It needs to be strong and
the inertia mass of it adds to the speed at which you can print. A
lightweight printer vibrates more which will eventually lead to clay
collapse. And because speed is one of the main motives to use 3D
printing over slip casting the printer must stay stable even when
printing other than nicely curved forms. This way it could be a
functional and very interesting addition to any potter’s workshop.”
he argues. 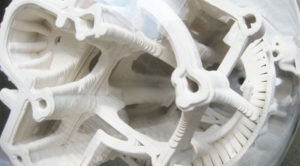 The small version would accommodate potters as well as educational
institutes who want to experiment with 3D clay printing but do not
have a huge oven to their disposal. And while 3D printing is growing
fast, clay is still a difficult material to deal with. Not many people
have the space or time to work with it.

As a result Yao and Marlieke see clay printing as a specialized
category within the maker community. “There are a few small
groups scattered around the world developing 3d clay printers. Most
of their techniques are open source. But there aren’t many digitally
skilled potters yet which leads to a slow progress in the field of 3D
clay printing.“
For now it’s the challenge for them to evolve their printer. They are
continually redesigning and testing new ideas while maintaining a
steady flow of low cost ceramic designs for the consumer market. 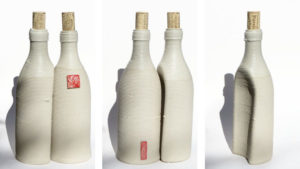 ’round bottle and its altered version.’

Z Machine is a fully mechanical Clay 3D Printer, powered by 20 kilograms of weight. The printer, driven by chains and gears, works as a geometry calculator that prints out an unlimited amount of geometric shapes. The printed clay can then be glazed and fired to become a piece of elegant Crafts.

Source: 3ders.org written by: Alec Though 3D printing in plastic is entering homes, garages and workshops throughout the world, ceramic 3D printing is something you rarely see at those levels. And that is exactly why the work of Dutch design duo Yao and Marlieke of Vormvrij 3D has been so groundbreaking. Earlier this year, they released the […]

Author: Marlieke Wijnakker Novi Limestone Printer Instead of creating more waste we have to come up with ideas to diminish the existing pile. Quarrying is an inefficient process with most of the waste created going into aggregates. In an effort to sustainably deal with this high amount of valuable limestone waste, Jack Biltcliffe, in collaboration […]