All we wanted to do was substitute one material in the 3d printing process for another. A simple exchange of clay in the place of plastic. The hardest work had already been done. Extrusion printing in plastic originated in 1988 and open 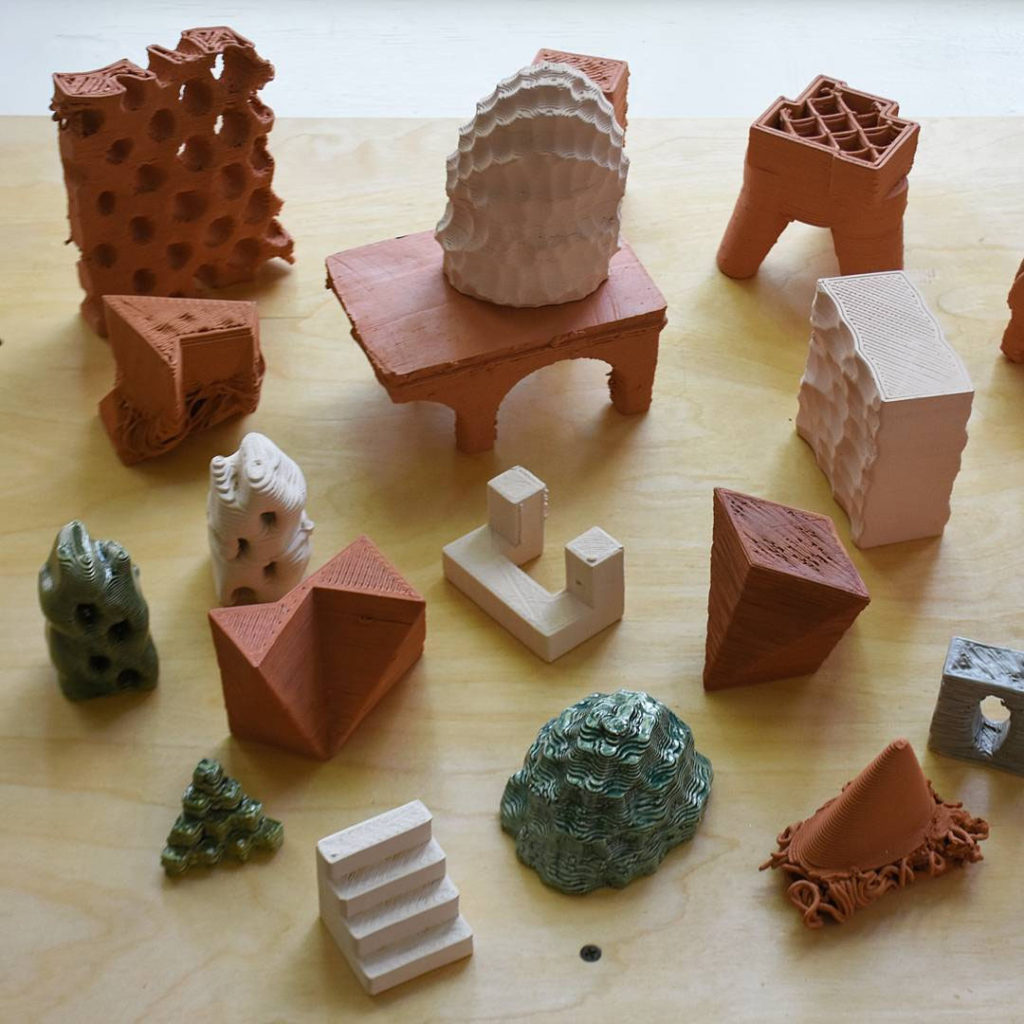 source plastic 3D printers emerged in the late 2000’s. In the 2010’s “consumer” or “hobbyist” 3D printer prices fell quickly while quality increased rapidly. Shortly after the arrival of desktop plastic printing, as early as 2009, artists and designers such as Studio Unfold and Jonathan Keep began to produce compelling 3D printed objects in clay.

So if you were looking to start clay printing in 2015 you could pause to give thanks to many pioneers and quickly begin printing, right? Turns out that the answer depends on what you want to make, and how you want to make it. Having worked with plastic printers since 2008, I wondered if a clay printer might be able do everything a plastic printer could do. So while much clay printing has oriented itself around the process of vessel making via continuous extrusion, I was, and remain, eager to explore clay printing in a way that takes advantage of plastic printing features such as infill material, support material, precision software control, and multiple-material printing. 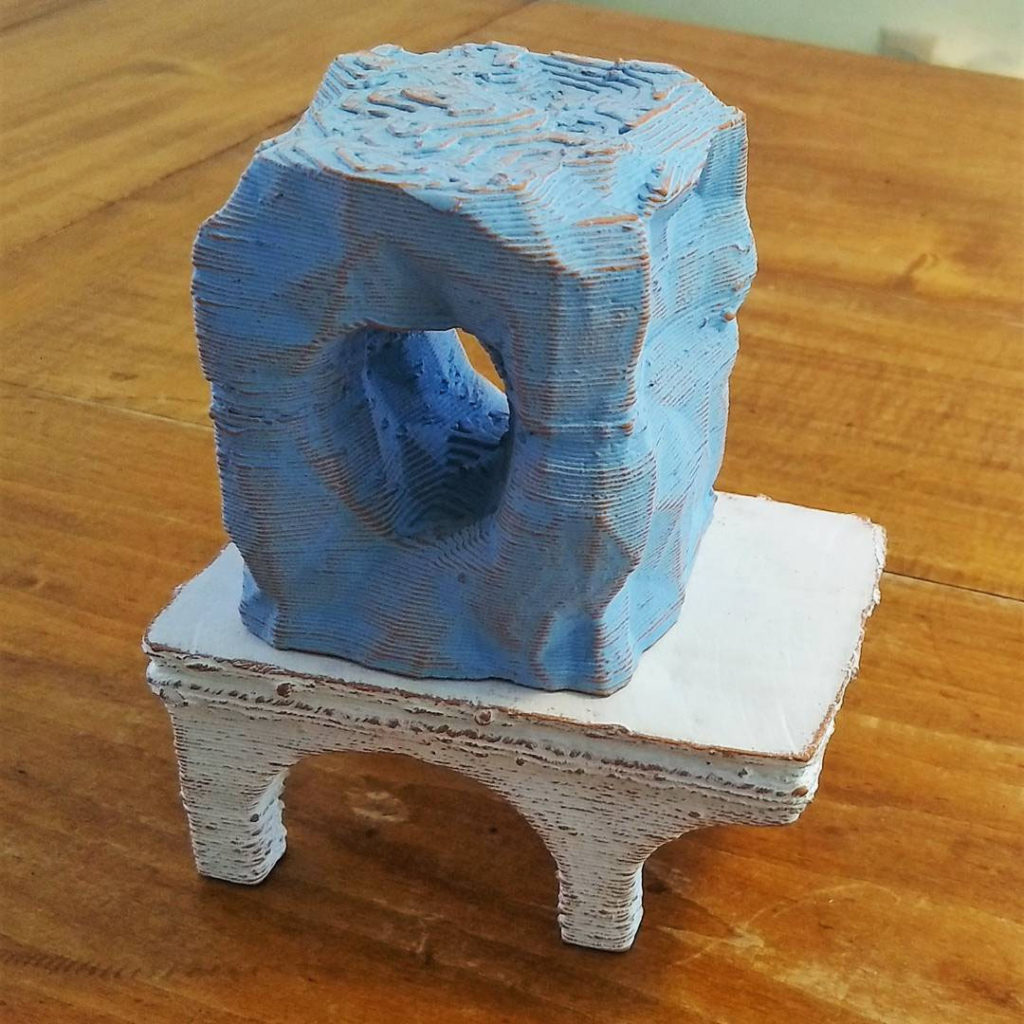 While we have now at least experimented with all of those possibilities, clay printing still has a long way to go before it can match the sheer versatility of desktop plastic printing. However, nothing I have experienced in our tests and constant tinkering has convinced me that clay cannot perform as well or better than plastic in all of these areas. Additionally, there are ways in which clay printing might greatly outperform plastic printing. These include inexpensive material costs and greater potential for scaling up, for starters.

After two years of experimentation (facilitated by myself, some dedicated students, and some supportive colleagues), we have designed and built something like seven iterations of our clay printer. Over time our design gradually ceased to resemble the machines we only wanted to modify at the outset of the endeavor. For better or worse, we are working with a design now in which nearly every physical component, apart from “readymade” motors and electrical components, started with me making a sketch. We initiated the project with an emphasis on simplicity, but as our research developed the machine grew increasingly complex. The most significant design changes were reluctantly made, and were the direct result of asking simple questions such as: ”What is the simplest path the clay can take from storage to print?” 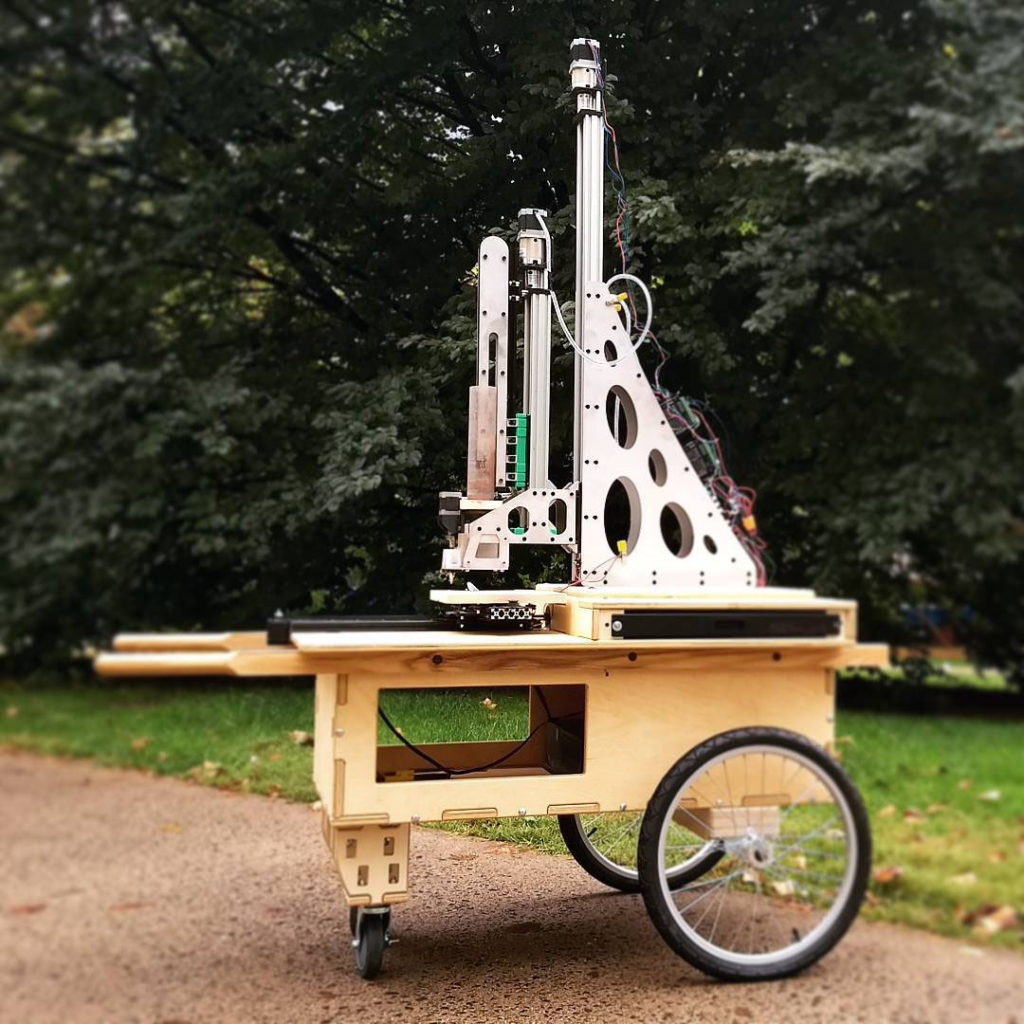 My hope is that over time, and with a number of iterations, we can help expand the possibilities of this process. I believe clay printing is in its absolute infancy still. Our particular efforts have been channelled primarily toward hardware design, yet increasingly I’m wondering if firmware and software design aren’t going to be equally (if not more) important. There are many opportunities for collaboration and sharing of ideas within a clay printing landscape which thus far has not attracted the attention of large corporations such as 3D Systems or Stratasys, or even Ultimaker or Prusa. Extrusion clay printing in 2017 is being developed by curious individuals and a few specialist manufacturers such as VormVrij and WASP. In many ways this lack of industrial interference makes clay printing more engaging and fun for those of us involved. Much like sitting behind a potter’s wheel for the first time, it’s harder than it looks.

source: Jonathan Keep Annoyed and frustrated by 3D Systems buying out and then stopping the production of the RapMan 3D printer. This was the first kit printer Belgian design duo Unfold adapted to print with clay and has subsequently been copied and widely used by others, I decided to develop my own replacement 3D printer. […]

Author : Matthias Weber in colaboration with, Malcolm Mobutu Smith. Word from the editor: Matter Meddles with Math was part of a project at Indiana University (Bloomington) with the name “(Re)Imagining Science”, where artists and scientists would collaborate on artistic rendering of scientific objects. The outcome was a small exhibit with works from eight teams, […]

Digital Clay Fabrication – initial trials with the WASP Deltabot by: William Kempton, The PhD research project, a part of AHO’s continued involvement in research on Additive Manufacturing (AM), aims to investigate the possibilities of Additive Manufacturing, popularly labelled 3D printing, in the field of Product Design. Clay is a mineral which can be shaped and formed […]